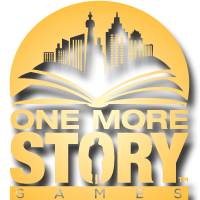 Guest speaker Jean Leggett is coming to Toronto Branch to speak on What’s Involved in Creating and Publishing Narrative Games.

Join us Tuesday evening to hear guest speaker Jean Leggett, co-founder of One More Story Games Inc., give us a show and tell on what’s involved in creating and publishing narrative games. Whether or not you’re a game-player yourself, and whether or not you believe that your existing short story or novel has potential to be turned into an interactive story game, you’re sure to learn something — there’s absolutely nothing like being in a room full of creative people to jump start the imagination!

See you there! And in the meantime, don’t forget to write!

Please RSVP to Carla at Carla Hackett at thatswrite46@gmail.com.

About One More Story Games

One More Story Games is an independent games studio in Barrie, Ontario. Its narrative game engine and integrated marketplace, StoryStylus, was developed to help authors create, publish and play narrative games. The company is currently adapting Shakespeare’s Landlord, the first of five novels in the Lily Bard series by #1 NYT bestselling author Charlaine Harris, best known for her Sookie Stackhouse series adapted by HBO, out in fall 2017.