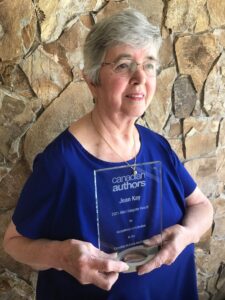 On Saturday, April 24, 2021, the 2021 winner of CAA’s Allan Sangster Award was announced by previous winner, Matthew Bin, at the association’s virtual Volunteer Recognition Event. The Sangster award was created in 1968 in memory of Allan S. Sangster, a CBC producer who served on the national board as a regional vice-president for Ontario until his untimely death in 1967. The award honours a CAA member for long and meritorious service.

The 2021 recipient of the Allan Sangster Award, Jean Kay, is an inspirational poet whose passion is to inspire and uplift through her work.

“In the twenty-one years that I have known Jean Kay,” says Margaret Hume, National Co-Chair, “she has demonstrated a cheerful willingness to provide skillful leadership and passionate encouragement to our non-profit arts service organization as well as to individual members. During most of these twenty-one years, she has been involved in the Executive Committee of the Canadian Authors–Metro Vancouver (including Victoria) Branch), taking on roles such as Publicity Chair, Vice-President, Program Chair, Treasurer, and story contest coordinator.

Jean was also the single driving force behind our anthology, National Voices, published in 2012, 2014, and 2016—she was the anthology coordinator, as well as the person responsible for layout and design.

At our monthly branch meetings, Jean could usually be found at the door welcoming members and guests, setting out sign-up sheets, information, and books. As the meetings got underway and people introduced themselves, Jean would encourage other writers by telling how she writes a poem every day and suggesting that others make a daily habit of writing. She would often read one of her poems, generally written for the occasion.”

Robert Mackay concurs, penning the following in support for her nomination:

“In 2010,  the Vancouver Branch sponsored our annual national conference, CanWrite!,  Jean spearheaded the three-day conference and made arrangements for the annual general meeting. CanWrite! is very complex to arrange, with workshops and panel discussions covering many topics. Typically, there could be dozens of presenters, panelists, editors, agents, and 80 or more attendees from all over Canada.

And, as if it was not a difficult enough project in any event, CanWrite! that year was held in Victoria although hosted by the Vancouver branch. In order to facilitate this very important project, Jean made numerous trips to Vancouver Island as well as performing the innumerable other tasks necessary when setting up such an event.

The most recent CanWrite! was in 2019, also hosted by the Vancouver branch with the assistance of the national office. Again, Jean was front and centre, looking after a myriad of details. CanWrite! has proved too difficult for branches acting alone, so is now coordinated by the national office—a testimony to the task Jean undertook in 2010. The 2010 conference would not have happened without her.” 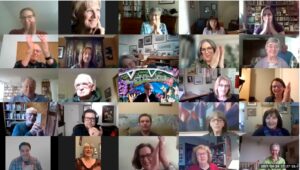 Before making the surprise announcement, Matthew Bin led up to it with a series of hints, including the following:

“When I think about the volunteers who I’ve met and who I have worked with in the association, I think back to when I first became National President. I was feeling somewhat unprepared for the role, but a conversation with a volunteer who I’d known for years made me feel so much more positive about what I could do as a volunteer and as a leader in CAA.

[Jean] has always been an exceptionally warm and kind person, but in this time when I really needed some support, she was the one to come forward and give it. I think it is important to recognize how much we, as volunteers, help each other as well as this organization. And I feel that if I’ve any success in pushing this organization forward, so much is owed to this conversation with  [Jean].”

Jean’s company is J K Creations, and she specializes in creating poems on request for birthdays, weddings, anniversaries, retirements, graduations, and memorials. She has dedicated the first half hour of every day since August 1993 to writing—before she eats, drinks or speaks. Jean took early retirement, in October 2000, from her career as Sales Events Coordinator for Canadian Airlines. Jean has published several books of poetry, including In the Early Morning Light, Morning Light (a book of 121 inspirational poems), and Christmas Poetry to Inspire — the first in a series of Poetry to Inspire e-books.

Find out more about Jean on her website https://poetrytoinspire.com/about/.

Missed the Volunteer Recognition Event? You can watch the recording here.

Jean was asked to draft a poem for this year’s Volunteer Appreciation Event.  in part, as a way of ensuring her attendance. She was asked to read the poem shortly after the opening remarks. This is the poem Jean penned and read at the event:

is definitely what we do

by volunteering time and energy

in the various roles we play through.

with the multitude of tasks to do,

can only be accomplished

Your role is so important —

for every hour you put in

helps bring our goals to fruition,

so CAA achieves a win.

It could not be done without you,

funding is just not there.

for all the time that you spare.

Yes, we work behind the scenes

at branch level or national,

and together we make things happen

in ways most professional.

CAA could not survive

without help from volunteers.

Sincere thanks to each and everyone

for your dedication over the years.

You are appreciated very much

for your input and good ideas.

As we celebrate Volunteer’s Week

Let’s drink a toast to us. Cheers!