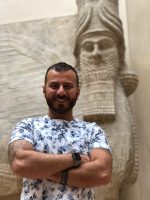 Ahmad Danny Ramadan is a Syrian-Canadian author, public speaker, storyteller and an LGBTQ-refugee activist. His debut novel, The Clothesline Swing, won Independent Publisher Book Award for Gay/Lesbian/Bi/Trans Fiction, was named among the Best Books of 2017 by the Globe and Mail and the Toronto Star. It was longlisted for Canada Reads 2018 and Shortlisted for the Evergreen Award 2018. It’s also a finalist for the Gay Fiction Category in the Lambda Awards. He also translated Rafi Badawi’s 1000 Lashes: Because I Say What I Think, and published two collections of short stories in Arabic.

As an LGBTQ activist, he has been involved in supporting Queer and Trans identifying refugees from Syria to immigrate to Canada. Danny runs the annual fundraiser An Evening in Damascus to support those efforts. Since May 2015, he has raised over $100,000 to support a total of eight other LGBTQ-identifying Syrian refugees and participated in efforts to ensure safe passage to 24 Syrian Queer and Trans refugees to Canada. He was appointed Grand Marshal for the Vancouver Pride Parade 2016; he was also awarded the StandOut Award for his social activism, the RBC’s Top Immigrant in Canada award, and the Bonham Centre Award for Excellency. Ramadan lives in Vancouver since his arrival in Canada in 2014.

Congratulations as well to our two remaining shortlisted authors — they really made it a tough call for our judges!

Catherine Graham is a Toronto-based writer of poetry and fiction. Among her six poetry collections The Celery Forest was named a CBC Books Top 10 Canadian Poetry Collection of 2017 and appears on their Ultimate Canadian Poetry List. Michael Longley praised it as “a work of great fortitude and invention, full of jewel-like moments and dark gnomic utterance.” Her Red Hair Rises with the Wings of Insects was a finalist for the Raymond Souster Award and CAA Award for Poetry and her debut novel Quarry won an Independent Publisher Book Awards gold medal for fiction. She received an Excellence in Teaching Award at the University of Toronto and was also winner of IFOA’s Poetry NOW. Her work is anthologized internationally and she has appeared on CBC Radio One’s The Next Chapter with Shelagh Rogers. Visit her at www.catherinegraham.com. Follow her on Twitter and Instagram @catgrahampoet

Michael Gates for From the Klondike to Berlin (Harbour Publishing)

Michael Gates first came to the Yukon in 1971 and fell in love with the place. In 1977, he became the Curator of Collections for Klondike National Historic Sites in Dawson City and spent the next 30 years immersed in Yukon history. He writes the History Hunter column in the Yukon News and has authored four books about the Yukon, the most recent being From the Klondike to Berlin, a history about the Yukon during World War I. He has written hundreds of articles for newspaper, magazine, journals, and books, and has consulted on several high profile films on the Klondike. He has twice received awards from the Yukon Historical and Museums Association for his work in the fields of museums and history. He currently lives in Whitehorse with his wife, Kathy and their dog, Casca.