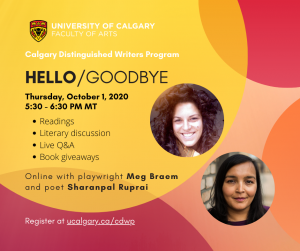 Meg Braem is an Alberta-based playwright whose plays have been nominated for the Governor General’s Literary Award and won the Alberta Literary Award for Drama, the Alberta Playwriting Competition, and Playwright Theatre Centre’s “The News Competition.” Her work has been presented at the University of Lethbridge, Citadel Theatre, Theatre Calgary, Lunchbox Theatre, The Belfry Theatre, Sage Theatre, Sparrow and Finch Theatre, Atomic Vaudeville, and Intrepid Theatre. Most recently, her play The Josephine Knot was published by Playwrights Canada Press and she was the dramaturg on Anna Chatterton’s new play Cowgirl Up at Alberta Theatre Projects.

Sharanpal Ruprai is an Assistant Professor in the Department of Women’s and Gender Studies at the University of Winnipeg. Ruprai’s début poetry collection, Seva, was a finalist for the Stephan G. Stephansson Award for Poetry at the Alberta Literary Awards. Her poetry is featured in many anthologies, including GUSH: Menstrual Manifestos for Our Time, The Calgary Renaissance, Red Silk: An Anthology of South Asian Canadian Women Poets, and Exposed. Her second collection of poetry, Pressure Cooker Love Bomb, was released in April 2019.