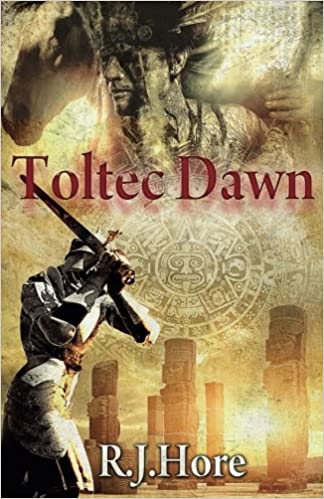 Convert Fergus mac Ogma, a youthful Irish acolyte of the god Tezcatlipoca, has a burning desire and will to become more than a native underling in a land controlled by the invaders from across the ocean. But Tezcatlipoca altars are scarlet from the living sacrafice of his Christian countrymen and the time is coming when his own blood might be demanded to seal his choice. Captain Mixcoatl is settling in with his wife as commander of the Toltec fort at St Albans in the province of England. When the governor strips the province of troops to invade the Continent he’s left with a skeleton force to hold the colony against the opportunistic invasion of the Scots. Rowena, the young Saxon girl, is fleeing England with her uncle the monk and attempting to reach the Continent across the Channel. Thwarted, her uncle dead, Rowena finds herself a slave in Mixcoatl’s household. But when she’s taken by Normans supporting the Scots she’ll have to decide where her loyalties lay. In the uneasy aftermath of the Toltec conquest of Ireland and England, three lives gradually become entwined. Facing a new invasion of an already conquered land, they are forced to confront the truth of where their loyalties lie.

Fergus’ gaze wandered to the dust motes captured in the wayward beam of sunshine that entered through the narrow window. For some reason the fine specks reminded him of grains of gunpowder. He might not be squatting here if not for the gray magic of the overlords.

The headmaster’s stern stare swept the class. “Who can tell me the significance of today’s date?” The tall redhead’s hand was the first raised.

Fergus rose to his feet and shook a cloud of ash from his shoulders, the residue from the morning’s flagellation. “This is the one hundredth anniversary of the first landfall in Connaught by the Golden Jaguar.” He couldn’t help adding, “From this year of 1215AD, according to the peasants.”

“And what is the significance of the landing, Fergus mac Ogma?” Frowning, the headmaster tugged at his jade earplug, one of the signs of his impatience with the seminary students.

Fergus allowed a smile to flicker across his broad, freckled face. He made a slight bow. “This landfall brings civilization to the five kingdoms, and enlightenment to the rest of the world.”

The headmaster frowned. “Not yet to all of the rest of the world, young pup.”

“Is it not simply a matter of time, Master?”

“You presume to know the wishes of the Smoked Mirror, my unworthy pupil?” The ancient priest’s dry voice dropped to the level of a fading autumn breeze.

The other novices shrank into their threadbare robes.