We’re Not in Kansas 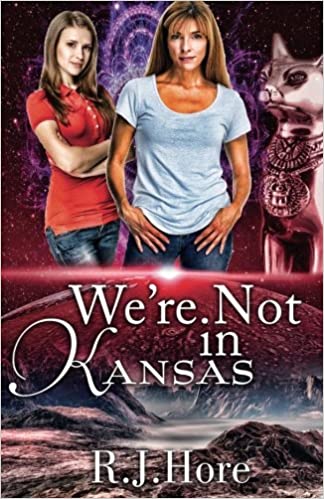 Archaeologist and single mother Macy and her teenage daughter Tiffany are off to a dangerous part of the world, on a foolhardy search for traces of the ancient Egyptian cat-goddess, Bastet. What they find is far more than they bargained for: a dangerous dictator, a mysterious police inspector, and a grizzled Indiana Jones look-alike. You might say the trip takes them right out of this world. Will they get home alive or simply disappear into very thin air? Set in the near future, We Aren't in Kansas is a marriage of a thriller and speculative fiction, with a soupcon of romance.

Macy rose to her feet, leaned over, and poured the entire ruby contents of her wine glass neatly over the crotch of his light gray slacks. For one brief second she considered following this up with a slap across his now-shocked face; instead she gritted her teeth, set the glass with care on the table, and picked up her purse.

“You bastard! You waited until the night before I was going away for three weeks to tell me we’re breaking up. Because you find us boring!” She took a deep breath to stop the shaking. “Enjoy your dinner. You can have mine too, to remember me by.”

Macy glared around at the patrons at the nearby tables, all trying to pretend they weren’t listening or watching; all that is, except the fat idiot who was filming the proceedings with his wrist-cell. Gathering what slight dignity remained, she pointed her nose at the sparkling ceiling and stalked between the diners. She half expected a plaintive “Do you know how much that wine cost?” to follow her across the room.

Her dramatic exit, marred briefly by a slight stumble on the steps at the entrance, led directly past the flesh and blood hostess frozen at her station, menu tablets in hand, waiting with a party of four. That young lady, her clinging black gown displaying far too much analog information, stood with jaws gaping. The two men beside the hostess took a quick nervous step backward as Macy swept by.

"A fantastic adventure that will take you out of this world. This book starts with Macy, and archaeologist, whose ex-husband drops off her daughter unexpectedly before her expedition. Danger awaits them at every turn. …I really enjoyed this book. It was nothing like what I expected. …I couldn’t put this book down until it was finished. I will definitely be looking for more from this author."
— 4.5 out of 5

"Great sci-fi. I really enjoyed this book. Lots of laughs and giggles. A fun read for teen to older readers."
— 4.5 out of 5