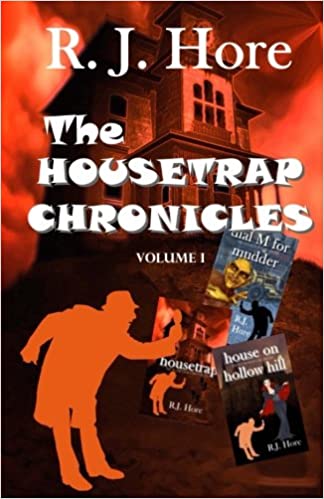 What happens if you dare pass through the warped door of Randolf C. Aloysius, Private Eye? You enter the fantasy world of the Housetrap Chronicles, where anything can happen, and usually does. Here are three stories from Randy’s well-worn case files: Housetrap: A missing boyfriend, an elf on the run and Martian Vampires? What is a private eye to do? Dial M for Mudder: Locate a missing statue in the dismal swamps of Venus! No problem? Just assemble an expedition with a curvaceous assassin, a senior citizen, and a teenage guide. House on Hollow Hill: What could be simpler, simply attend a high-fashion weekend in the country with your half-banshee secretary while posing as another couple, and keep a close eye on the erratic host? Why? Because someone is planning to murder him.

I don’t like Elves, never have. I sat tilting back in my chair counting the stains on the ceiling when she walked through the open door of my inner office unannounced—unannounced, because I’d just given Bertha the afternoon off to visit her sick brother. Bertha’s half Banshee, thin as a lamppost with long straight dark hair and big brown eyes. She’s always got a relative down with the Black Death or some obscure curse; I think she has twelve brothers, but I digress.

The Elf arrived in my office wrapped in a full-length gold lamé coat with a large hood covering her head and hiding most of her features, but I could tell she was pure Elf. Those yellow eyes are a dead giveaway even if you can’t spot the pointed ears. I’m a student of nature, have to be; the breed often determines character, or motive, or veracity. In my business you have to stay two jumps ahead or you’re squashed like a scarab. I’m a Mongrel myself. You can never tell about Mongrels, and there are more of us around now ever since the Goldilocks affair. Now there was a real witch, not the kind with just a warty nose, but she married that Wolf back in the days before they gave femmes the vote. Then they went overboard and made it all legal in the Intermarriage Act of 1812, and everything has tumbled Jack over Jill downhill ever since.

"Fantastic Read. The story is definitely plot driven and the other characters serve the plot. Aloysius doesn’t trust any of them and so neither did I, and it turns out that no one is quite what they seem and everyone is out for whatever they can get."

"Good Reading - an exciting and fast-paced novel with a bevy of suspects among the weekend guests as well as the varied staff members. Suspects are eliminated when they become victims, and Randy and Bertha have their work cut out for them."

"Recommended. What do you get when you combine the literary genres of fantasy and the detective story? The answer is R.J. Hore’s The Housetrap Chronicles. …As bizarre as this mash-up of genres seems to be, Hore makes it all work, and in each novella he incorporates a clever plot twist relating to the crime. Though the novellas were originally written for an adult audience, high-school aged fantasy fans will definitely be drawn to the most imaginative world that Hore has created."