Loved by Brad, a werewolf, and Victor, a vampire, Julie, stricken by a deadly disease, needs both men to survive. Upon the sudden death of her father, Julie becomes Matron of a rural ranching town where supernaturals co-exist with humans. The neighbouring wolf pack wants Julie, the only adult female, for procreation but whenever her body tries to shift, she nearly dies. Only Victor's rapture numbs her body to the pain. She knows to continue her own lineage she must convince Brad to share her with Victor for without both, she cannot live, unless her father's killer gets to her first.

Brad Billingham, full-blooded werewolf, felt fear. Normally, he did not fear anything; he had nothing to fear. But, staring him down, in the middle of his corral, was the longest-legged, most viciously tail-swishing, meanest black-eyed stallion he had ever seen in his life. And this stallion stood between him and eight mares of varying temperament and beauty. Brad had never felt so out of place than he did at that moment, again questioning his decision to move out to the country.

“Remind me why you had to bring him along, too, again?”

“He wasn’t going to let us take the ladies from him. He is very protective of his women.”

A truck door creaked open. Footsteps approached. The stallion nodded his head twice and nickered in a low cautious way. Brad first saw her long, muscled legs wrapped in blue jeans then Julie Woods slipped her arm around his back and hooked her fingers into his own jean’s belt loops. He put his arm around her shoulders, pulling her in close. He couldn’t stop the reaction his tight jeans did little to hide.

“But didn’t he know I’d be here?” he asked, his voice a little tenser than it should be, and not just from the close proximity of the stallion.

“He’s just doing what his instincts are telling him to do.”

Brad pulled her around in front of him. He placed a hand below her chin—unnecessarily, for she was already reaching for his lips. 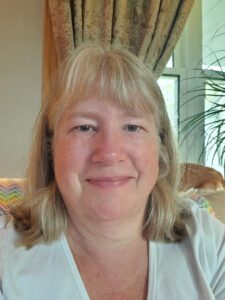 Sandra Stewart, writing as Lee Pearce, lives in the wild countryside of southern Ontario and writes romance, fantasy, and supernatural novels. Sandra also teaches college communication courses and creative writing workshops. She believes you have a story to tell and, with encouragement, you can write it.