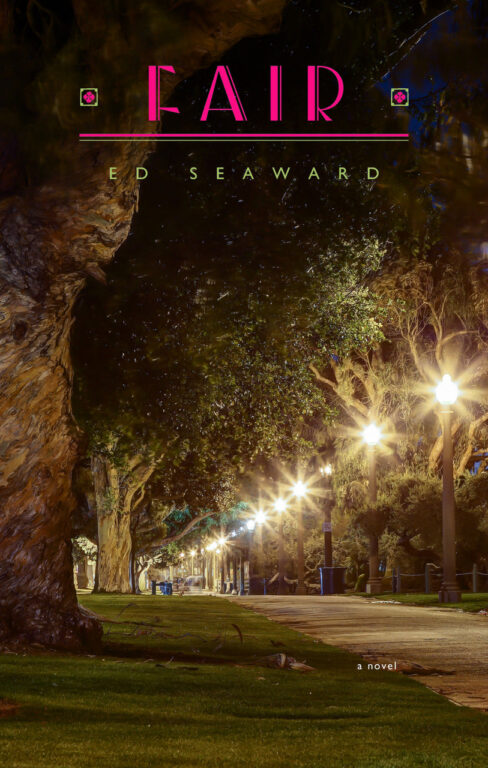 In this spare, poetic novel, a young homeless man finds solace in friendship, falls prey to the machinations of a malevolent gang of thugs, and ultimately is swallowed up by the inevitability of consequences on the dangerous and deceptively sunny streets of L.A.

Eyan (pronounced Ian), homeless and all but invisible, drifts through the sundrenched streets, parks and boardwalks of Los Angeles, sometimes avoiding, sometimes seeking the shadows. A chance encounter with his childhood friend, Marc, leads Eyan to meet ‘the professor’, an erudite and tragic figure who takes Eyan under his wing, reading to him from Milton’s Paradise Lost in the lustrated light of the city at night. But these friendships also drag Eyan into the City of Angels’ Skid Row, the largest homeless community in North America. There, the sinister Paul and his gang of black-garbed ‘eyeless boys’ have established a reign of daily terror, committing murder after murder which the police are incapable of stopping. As tensions on the streets increase, the professor continues to read from Milton’s great epic, and Eyan begins to wonder: if even the angels can find themselves at war, what hope, and what kind of home, exists for him? Fair offers a lyrical and reflective glimpse into a vulnerable young man’s struggle to survive in an indifferent, violent world.

He walks along the Pacific Ocean and the blue sea recalls to him a red automobile. Jeep. Cherokee. His mind is full of blue and red, remembering crashing colours of carousels and Ferris wheels. Loud sounds crashing too, then subsiding, like waves of fear softening with familiarity, tranquility finding a resting place. Eyan, a boy in his memory, lit up like a naked bulb dangling without weight, shimmering without effort, radiating without remorse. His younger sister, Yvonne, lit up as always, running ahead of Larry. Yvonne skipping nimbly, feet gliding, never coming to rest, skimming land as a cutter sailing over water, cutting waves.

Everything roils Eyan. He is not a cutter. He is more a cork, tossed. But not on that day, the day the blue sea reminds him of when he was a little boy. When Larry, the only boyfriend of Mother he ever loved, took him to Pacific Park and Eyan sailed over the fear-filled excitement of the crushing Hippodrome carousel music. Seated within the endless spinning Ferris wheel, usually feeling trapped inside the car as if within an overturned carapace whirled by recalcitrant boys.

"A homeless man wanders the streets and beaches of Los Angeles in search of purpose in Seaward’s literary debut.
Eyan has no sense of time and can’t remember how long he’s been on the streets or even his age. He guesses 20, but he looks considerably older, primarily because he had his rotten teeth removed. Though initially alone, he eventually reunites with Marc, a friend from school who lives on Skid Row with “the professor,” a man who once taught at the University of Chicago. This leads Eyan to connect with Paul, another, more dangerous former schoolmate. Paul’s a criminal, often surrounded by his minions, who enlists Eyan as his drug mule since Eyan walks everywhere and, like other homeless in LA, is effectively “invisible.” Paul’s gang is likely responsible for the dead bodies that are periodically turning up, a string of homicides that local detectives don’t seem capable of stopping. Meanwhile, Eyan struggles with thoughts of death and family, and he always carries a notebook that he fills with words he wants to remember. He has sporadic, “shifting” memories, from his mother and his sister’s disappearance during his first and only year of high school to a girl he once knew who committed suicide. It certainly doesn’t help his erratic memories when detectives question Eyan regarding some of the murder victims and ask about the contents of his notebook. Ultimately, Eyan makes a decision that will forever change his life as well as others’.
With few moments or recollections of happiness, Eyan is the quintessential tortured soul. He’s entirely sympathetic and endearing and only grows more so as readers get to know him. Though the story plants itself in dark territory, it’s not devoid of hope; Eyan’s notebook is an especially potent indicator that he continually strives to understand those around him. Seaward’s narrative is smoothly nonlinear, lucidly depicting flashbacks and memories. And while Eyan’s perspective isn’t strictly reliable (he’s completely unaware of how much time passes), supporting characters are distinctive. Marc in particular shows a kindness toward the protagonist that speaks volumes; he’s one of the few people who doesn’t mock Eyan. The author writes in a plain prose steeped in metaphor. For example, Paul’s minions are “eyeless” because they perpetually don mirrored sunglasses that not only quash their identities, but constantly remind Eyan of his own identity when seeing his reflection. Despite parallels between the City of Angels and passages of Milton’s Paradise Lost, which the professor reads to Eyan, Seaward’s tale is sublimely understated. He, for one, often portrays LA as a realistically grim rather than overtly hellish landscape: “Eyan wanders up and down the boardless boardwalk until the crowds thin to the point of disappearing. It is late at night. He finds his special place. The tiny spot he can crawl into, pull his knees to his chin and place a thumb in a toothless mouth.”
Relentlessly depressing but superbly composed story of a tragically lost soul."

"Fair, the first published novel from Canadian author Ed Seaward, offers the reader a warped pilgrimage into the underbelly of Los Angeles, trailing in the footsteps of lost soul, Eyan, as he flies low under the uneasy influences of pint-pot street tyrant Paul, and a wandering, dishevelled scholar, known simply as ‘the professor’.
Eyan’s magic cloak of social invisibilities—solitary, homeless, jobless—ostensibly makes him an ideal flaneur in the City of Angels’ sinister reverse face. His Los Angeles manages to feel at once limitless and claustrophobic: he meanders through sticky days and danger-filled nights at his own helpless pace. His way markers are usually the people he encounters, or counts on encountering: the coffee vendor on the boardwalk; the friendly waitress at a local diner. His own personal history is revealed in short, painful showings: his complete tooth lessness, at the age of twenty, is explained by a bout of violence from one of his mother’s boyfriends; we learn that his mother and sister abandoned him, as a teenager, after he chanced upon them performing a joint act of prostitution. The one protective figure in his early life, Larry, another of his mother’s boyfriends, also disappeared early on: “Eyan always knew Larry was not long for Mother”.
The professor—half father-figure, half spirit guide—and Eyan are brought together by Eyan’s childhood friend Marc, who himself lapses into street living, fuelled by substance abuse, for a time, before being spirited off by his family to ‘the clinic’. Despite his own street lifestyle, the professor is, somehow, mysteriously solvent: “The myth of the professor and his money: hidden somewhere and, from time to time, the professor leaves, walks and retrieves a little of the money, then returns”. Things settle into a cautious routine as Eyan and the professor become accustomed to one another’s company. The symbolism and structure of Milton’s Paradise Lost, which the professor begins to read to Eyan, loom large throughout the narrative, which pointedly “starts in the middle”. The professor pontificates; Eyan makes desultory notes: Omnipotent, Adamantine, Darkness visible, as he’s told, approvingly, “you do not have the worst vice, the vice of over thinking.” The professor, on the other hand, lives up to the stereotype of his name, spouting gobbets of history alongside his parsing of the poem: “A hippodrome was an ancient Greek race track where they held chariot races, like the Roman Circus” […] “Should I tell you of Messalina, Eyan? Maybe not. What need do you have to know of the wife of Claudius?” […] “In the fourteenth and fifteenth centuries […] great battles soaked red the fields of England, and men caused death with broadswords and longbows”.
Speech, particularly when the professor is around, always seems to take on this slightly convoluted register: Marc says “My friend has not been to the sea in so long that we declared a need for a pilgrimage and here we are with you.” Ponderously, the professor answers: “Or perhaps it is a quest […] A quest for the boy of whom Marc forever speaks.” Marc appears again to jumpstart the plot by introducing small-time crook Paul—another old classmate—who, under threat of violence, co-opts Eyan as a drug mule. Peripatetic and often invisible, Eyan has his uses, trudging obediently about the city on this new business, delivering parcels of drugs to one of Paul’s small army of droogs, “the brackish boys”. Between drops, he returns to the professor: they eat hamburgers at a friendly diner; they rest in the heat of Skid Row, alongside most of the city’s homeless population; they continue through Milton’s verse. Eyan ultimately begins drawing parallels between the poem’s fiery chasms, and his own personal and literal landscapes, peopled by demons and lost souls.
Throughout all of this, we veer between a limited and an omniscient third-person perspective. Eyan’s own thoughts, once they’re loosened from the professor’s cerebral posturings, are pointedly uncomplicated. Encountering two women, “Eyan wonders if they will be allowed to ride the Ferris wheel or the carousel or if they are too fat. Maybe they don’t want to ride those rides though. Maybe they want to eat red candy apples and blue candy floss”. If the intent is to emphasise Eyan’s almost total effacement by the wicked streets, the result is almost too effective: even in this slight novel, as its central character he’s often subsumed by the wandering plot. Although he guides the narrative, his character can sometimes read as resistant to interiority. We swirl in the slow current of his thoughts, “a timeless sack of memories”, which return repeatedly to the same points of safety—Larry’s easy kindness; sitting with Marc after school, watching cartoons. We don’t penetrate much further, and if this is a device meant to convey Eyan’s cultivated detachment, his larger, protective recoil from any attempt to understand him, or to harm him, it also has a perhaps unintended effect of muting our impulse to care about him. That would be a clever indictment of the reader, a textual mirroring of the same trap of societal indifference to which Eyan falls victim.
The tone of the writing seems to aim at a kind of sparseness, a poetic distillation of the language into one elegant register. Though as Eyan wanders again between Skid Row and the Boardwalk, as we’re confronted repeatedly with Paul and his cronies, as Eyan’s dulled thoughts shade into the professor’s florid monologues, the effect is occasionally more monotonous than incantatory. The book’s ultimate messages are in some ways straightforward, with Eyan a symbol of all the harmless individuals who slip through the cracks of a shamefully uncaring society. But the conclusions about who, or what is to blame for this are less clear—if there are indictments, they feel personal rather than structural. Fair ultimately leaves its readers to mull over the formidable Miltonian parallels around sin, fall, and redemption, and draw their own conclusions." 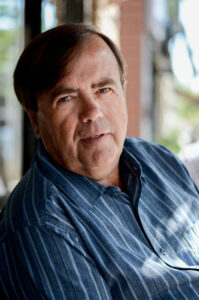 Ed Seaward completed his first novel, Son of Jack Nasty, in 2011 (as yet unpublished). Since then he has written a number of short stories and screenplays, including Mother Daughter Happiness, which was a screenplay finalist at the 2019 Pasadena International Film Festival. His novel, Fair, was published by The Porcupine’s Quill in 2020. After thirty years in the corporate world, he now spends his time cashing pension cheques, writing, and volunteering with Canadian Authors—Toronto. He and his wife Barb split their time living in Georgetown, Ontario and Santa Monica, California. Well, they did pre-Covid, and plan to return once the world has this pandemic under control.