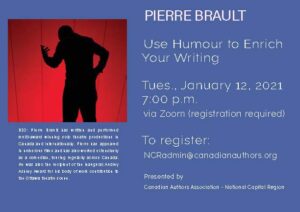 No matter what type of writing you do, if you look deeply into it to search for the “funny,” unexpected insights await. Pierre Brault will draw from his experience as a playwright, actor and comedian to show how humour enriches creative work.

Pierre Brault is perhaps best known for writing, performing and touring his multi-award winning solo shows with Sleeping Dog Theatre, 5 O’Clock Bells (GCTC co-production; national tour; Rideau Awards for Outstanding Male Actor and Outstanding New Creation), Portrait of an Unidentified Man (NAC co-production; Canadian and New Zealand tours), and Blood on the Moon (Capital Critics Circle & Montreal English Critics’ Circle Awards: Best Actor). Pierre was GCTC’s playwright-in-residence in 2006-07 and again in 2009-10. He has appeared in numerous films and has also worked extensively as a comedian touring regularly across Canada. Pierre is the recipient of the inaugural Audrey Ashley Award for his body of work contribution to the Ottawa theatre scene.