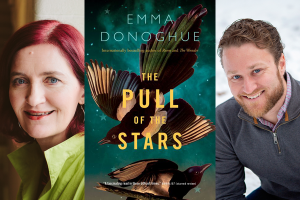 The 2020 Kingston WritersFest virtual program is starting off on a high note, welcoming back festival favorite Emma Donoghue with her gorgeous new novel, The Pull of the Stars, which Booklist praised as “a gripping portrait of a world beset by a pandemic and political uncertainty. A fascinating read in these difficult times. Readers ardently pursue every book by Donoghue, but the prescient pandemic theme and valiant nurse protagonist in her latest will increase interest exponentially.” Emma will speak with Ben Charland about the book, set over three days in an Irish maternity ward during the throes of the Great Flu of 1918, and it’s timely parallels with the realities of our current pandemic.

Books are available for sale at the official festival bookseller Novel Idea Books, online or in store at 156 Princess Street.

Attendance capacity is limited. To secure your spot in the virtual audience, click HERE.

About the author:
Born in Dublin in 1969, Emma Donoghue is an Irish emigrant twice over: she spent eight years in Cambridge, England, before moving to Canada’s London, Ontario. She is best known for her novels, which range from the historical (The Wonder, Slammerkin, Life Mask, The Sealed Letter) to the contemporary (Akin, Stir-Fry, Hood, Landing). Her international bestseller Room was a New York Times Best Book of 2010 and was a finalist for the Man Booker, Commonwealth, and Orange Prizes; her screen adaptation, directed by Lenny Abrahamson, was nominated for four Academy Awards.

About the moderator:
Ben Charland is a writer, podcaster and creative consultant. Ben’s work is informed by the many hats he’s worn over the years: playwright, theatre director, artistic director, tour guide, actor, political hack, traveler, teacher, government worker, blogger, speechwriter, manager and (yes) traffic coordinator for a paper shredding company. Ben hosts the weekly podcast What On Earth is Going On?, which covers wide and varied topics with guests such as poet and biographer Rosemary Sullivan, fantasy author Guy Gavriel Kay, Canadian actor Aurora Browne, and many more. Ben and his wife, Shelaine, now live in Whitehorse, Yukon, where he is helping to build a new society for writers and readers called Yukon Words.