Douglas Smith is a multi-award-winning Canadian author described by Library Journal as “one of Canada’s most original writers of speculative fiction.” 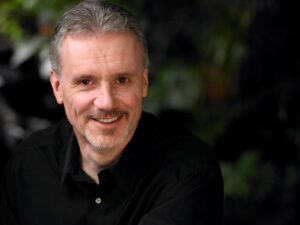 His fiction has been published in twenty-six languages and thirty-five countries, including Amazing Stories, InterZone, Weird Tales, Baen’s Universe, On Spec, and Cicada. His books include the novel The Wolf at the End of the World, the collections Chimerascope and Impossibilia, and the writer’s guide Playing the Short Game: How to Market & Sell Short Fiction.

Doug is a three-time winner of Canada’s Aurora Award and has been a finalist for the Astounding Award (formerly the John W. Campbell Award), CBC’s Bookies Award, Canada’s juried Sunburst Award, and France’s juried Prix Masterton and Prix Bob Morane.

“The man is Sturgeon good. Zelazny good. I don’t give those up easy.” —Spider Robinson, Hugo and Nebula Awards winner

“His stories are a treasure trove of riches that will touch your heart while making you think.” —Robert J. Sawyer, Hugo and Nebula Awards winner