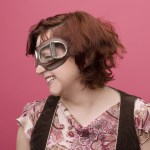 is am author, actor, fanthropologist and professional smartypants on AMI Radio’s Live From Studio 5. She’s appeared in podcasts, documentaries, and on television to discuss all things geeky through the lens of academia. She also has an addiction to scarves, Doctor Who, and tea, which may or may not all be related. Her life’s ambitions are to have stepped foot on every continent (only 3 left!) Her debut novel TRIPTYCH was nominated for two Lambda Literary Awards,  won the San Francisco Book Festival award for SF/F, was nominated for a 2011 CBC Bookie, was named one of The Advocate’s Best Overlooked Books of 2011, and garnered both a starred review and a place among the Best Books of 2011 from Publishers Weekly. Her sophomore novel, an epic-length feminist meta-fantasy titled The Untold Tale, (book one of the Accidental Turn Series), debuted December 2015, and was followed up by The Forgotten Tale December 2017. The final book of the series, The Silenced Tale, debuts December 2017.  The Skylark’s Song, book one of The Skylark’s Saga, a steampunk action novel about a girl vigilante and her mysterious rocketpack, soars into book stores in 2018.

J.M. Frey will be facilitating a culturebuilding clinic at our CanWrite! conference on Saturday, June 23 from 9:30 – 11:30 am.