WINNER OF THE 2016 CAA AWARD FOR FICTION 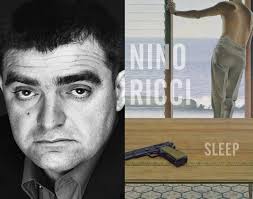 “Ricci belongs on the shelf reserved for writers such as Chatwin, Ondaatje and Flannery O’Connor.”
— TIMOTHY FINDLEY

Nino Ricci’s first novel was the internationally acclaimed Lives of the Saints. It spent 75 weeks on the Globe and Mail‘s bestseller list and was the winner in Canada of the F.G. Bressani Prize, the Books in Canada First Novel Award, the Governor General’s Award for Fiction, and in England of the Betty Trask Award and Winifred Holtby Prize. In the U.S. it was shortlisted for the Los Angeles Times Art Seidenbaum Award for First Fiction and was a New York Times Notable Book, and in France it was an Oiel de la lettre Selection of the National Libraries Association.

Published in seventeen countries, Lives of the Saints was the first volume of a trilogy that continued with In a Glass House, hailed as a “genuine achievement” by The New York Times, and Where She Has Gone, nominated for the Giller Prize. The Lives of the Saints trilogy was adapted for a television miniseries starring Sophia Loren and Kris Kristofferson.

Books in Canada commented that Ricci’s trilogy “so amply demonstrates the author’s tremendous talents that we would be foolish as readers not to follow him down whatever road he next chooses to follow.” That road led him to Testament, a fictional retelling of the life of Jesus. Hailed as a “masterpiece” by Saturday Night, Testament was a Booklist Choice for the Top Ten Historical Novels of the Year and a Times Literary Supplement Book of the Year. It was shortlisted for a Commonwealth Prize and for the Roger’s Writers’ Trust Award for Fiction and was a winner of the Trillium Award.

Testament was followed by the national bestseller The Origin of Species, which earned Ricci the Canadian Authors Award for Fiction and his second Governor General’s Award for Fiction. Set in Montreal in 1980s, the novel casts a Darwinian eye on the life of Alex Fratarcangeli, who is torn between his baser impulses and his pursuit of the Good. “This novel does so well, on so many levels,” wrote the Toronto Star, “that it’s hard to know where to begin tallying up the riches.”

Ricci is also the author of Pierre Elliott Trudeau, a short biography that forms part of Penguin’s Extraordinary Canadians series, edited by John Ralston Saul. Ricci’s biography, according to HistoryWire, “provides the best, and best written, perspective on Trudeau there is.”

Ricci most recent novel is Sleep (Doubleday Canada, 2015), the harrowing tale of David Pace, an academic whose life unravels after he comes down with a sleep disorder. “A frightening and essential addition to the oeuvre of one of this country’s best and most important writers,” wrote Quill & Quire, hailing the book as “Ricci’s darkest and most thematically daring work to date.” Sleep won Ricci his second Canadian Authors Award for Fiction and was a Toronto Star Top 5 Book for 2015, as well as a Globe and Mail and National Post Best Book. “If endemic narcissism is one of the central pathologies of contemporary culture,” the Toronto Star wrote, “then Ricci has crafted with Sleep one of its holy texts.”

Nino Ricci was born in Leamington, Ontario, to parents from the Molise region of Italy, and completed university studies in Toronto, Montreal, and Florence, Italy. He has served as a writer-in-residence for the Toronto and Kitchener public library systems, for the University of Windsor and the University of Toronto-Scarborough, and has held the Mariano Elia Chair at York University, the Chair in Religion and the Arts at Assumption University, the G. M. Hopkins Chair in Literary Studies at John Carroll University, the Killam Visiting Professorship in Canadian Studies  at Bridgewater University, and the Pathy Visiting Professorship in Canadian Studies at Princeton. He is also a past president of PEN Canada, a writers’ human rights organization that works for freedom of expression.

Ricci has been a recipient of the Alistair MacLeod Award for Literary Achievement, of York University’s Pinnacle Achievement Award, of the Engel/Findley Award for a Writer in Mid-Career, and of an honorary doctorate from the University of Windsor. In 2011 he was appointed a member of the Order of Canada. He lives in Toronto with his wife, writer Erika de Vasconcelos, and their children.