Vivie Goes to Hell in a Hatchback 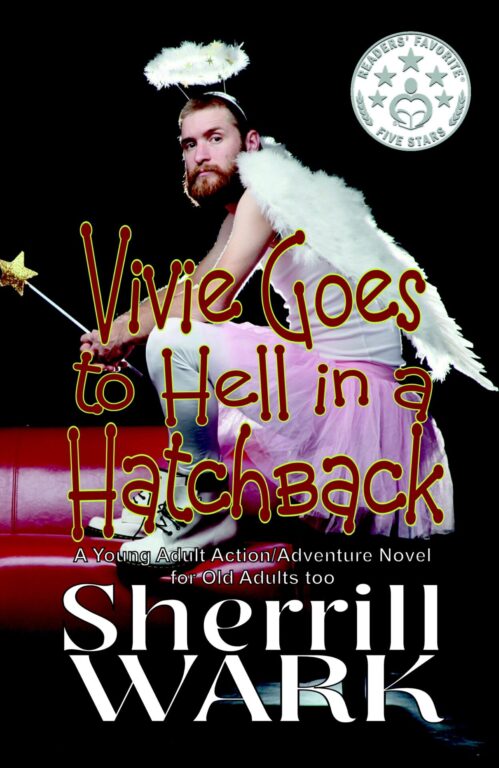 To her Guardian Angel’s absolute embarrassment, her “Charge,” teenage Vivie, dies while texting and driving. Susan, a film-noir fan and wannabe writer, who passed over in the early 1960s as a teenager herself, must get Vivie away from the accident site before she dissipates. But since Vivie recognized Susan’s existence only once when Vivie was 13, and only then thinking it was her recently deceased pet rabbit, Petunia, this will take some doing. As Susan and Vivie work their way through the many challenges facing them, the annoying George keeps popping up unannounced and very much unwelcome. An absolutely hilarious journey through the Afterlife.

Her aura glowing with flashing shards of angry orange and immature pink, Vivie sat to the side with her mouth hanging open. Knowing what I do about surprise deaths, I was sure she would be sitting like this for years unless somebody came to collect her. Aside from her mother, who didn’t believe in anything much anymore, there would be only a few sad friends depositing flowers, candles, cards and teddy bears at this soon-to-be briefly famous spot under the overpass for the next few days, thinking only of themselves and their own sorrow and not about what Vivie was about to experience in the weeks, maybe years to come.

I had to get her out of there before she expended all her energy and dissipated into nothing but a ghost, a big concern for us when one of our Charges bites it violently.

And by the way, despite what you might have heard, we refer to ourselves as Guides, not Guardian Angels. I once referred to myself as an angel in front of Pete and he laughed so hard he accidentally farted.

"In Vivie Goes to Hell in a Hatchback, Vivie was texting and driving in her mother’s car when she hit a cement pillar and died. Now that she is dead, her Guardian Angel Susan now has to make sure that Vivie travels safely beyond the Veil and gets there in time. The only issue is that Vivie is not being very cooperative as always and the danger is proving to be a little too much. They have to work as a team to get through some very weird obstacles and communities to make it happen. Now Vivie must learn to listen to Susan and Susan has to trust Vivie. Can they do it?

Humorous and action-packed, Vivie Goes to Hell in a Hatchback by Sherrill Wark is a fun-filled young adult novel that I absolutely loved. There wasn’t a dull moment in the story. The author kept the momentum going and ensured that the reader was hooked. This could be a great TV series on Netflix; I can even imagine certain actresses playing Vivie and Susan. The duo is hilarious, they try to make things work the best way possible, but of course, things are tiring. The bickering between the two is just too much fun to ever stop. However, the love and affection between them are very evident. I enjoyed their dynamic, their relationship and how they worked as a team to get things done. Vivie’s character development was intense and immense. She stopped being a brat and started to grow up; she learned to be compassionate and patient. This is a true entertainer!"