My family history in revolutions 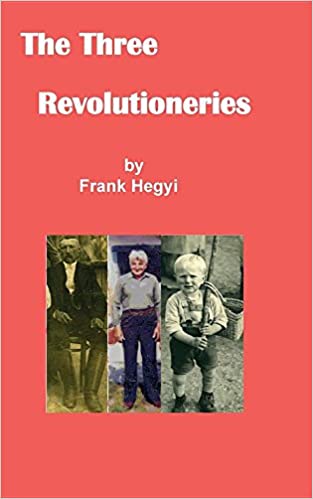 This book is about three revolutionist: my great-great grand Father, my Uncle István and I. My great-great grandfather, a Hungarian nobleman, visited the Hapsburg Castle on many occasions. The Estate in western Hungary and it was about 150 kilometers to the north-west to Vienna. He joined the 1848 revolution and was killed as a member of the Hungarian patriarchy. His estate was confiscated and my great grandfather was brought up as a citizen in Szemegye, Vas megye. My grandfather tried to rebuild the family fortune and succeeded to a certain aspect but my father lost it in 1952 as part of the collectivisation. I grew up while my father fought the government and we became very poor. So, in 1956 I joined the revolution against the Soviet occupation. Our insurrection was defeated in November 4, 1956 and I escaped only 3 hours before youth leaders, including myself, were to be executed. The following book covers the stories of my family’s part in the revolutions. My great-great grandfather died as part of the patriarchy. My Uncle spent 5 years in a death camp, and I escaped to the west and rebuilt my life as a scientist, government employee and an entrepreneur.

My family involvement in the struggle for justice. My great-great grandfather gave his life to the homeland. My uncle Istvan suffered greatly in 5 years being captive. I escaped 3 hours before being shot by the police and rebuilt my life in the West.

Reviews:Ian Shaw, Author and Past President of the Ottawa Independent Writers wrote:

“Canadian author Frank Hegyi’s account of his personal participation in the Hungarian Revolution of 1956 provides the reader with a front row view to one of the most important events in contemporary European history. It reminds us of how easy it is to stand for what one believes, only to be forced into exile and face the daunting task of building an entirely new life in a foreign land. Hegyi’s personal story exemplifies human resilience.”

"In 1956, at the age of eighteen, Frank Hegyi crawled through a minefield across the border between his native Hungary and Austria, fleeing a
Communist firing squad. At 23 he graduated on scholarship at Edinburgh
University in forestry. After three years in British Guiana, he immigrated to Canada. By 1980, he was a Director in the British Columbia forestry service, where he had extended the science and practice of forest inventory. Then he went into business for himself. Travelling the world as a consultant, he introduced computerized wireless communication in forest mapping and inventory. Paralyzed by a stroke at 66, he fought back to health and a further career as a writer, which he continues today. The Three Revolutionaries is Frank Hegyi’s autobiography. It is also the story of his Hungarian ancestors who championed their country’s freedom over three generations. Illustrated with archival photography, The Three Revolutionaries is a personal window into Hungarian history, through which we see the unyielding spirit of Hegyi’s country, family and his truly impressive lifetime."

"Frank Hegyi’s The Three Revolutionaries presents a family saga in Hungary, reaching back to his great – great grandfather. The fervour of
revolution was strongly manifest in each generation, including Frank. He
joined the 1956 revolution against Soviet occupation. He was captured along with other youth leaders but managed to escape through a minefield
before the youth leaders were executed. He describes each dramatic generation and the series of revolutions they fought and died in. For himself, the escape to the west enabled a new life as a scientist, entrepreneur and government director in Canada. He writers that he was
'the lucky one'. The archival photography punctuates the saga of Frank
Hegyi’s remarkable life and ancestry."

Frank Hegyi was born in Hungary and emigrated to the west in 1956 at the time of the revolution; he was in 4th year in High school at that time. I continued my education in the west and I have a B.Sc. degree in Forestry from Edinburgh University and an M.Sc. in Biometrics at Toronto University. Mr. Hegyi began his career as Assistant Conservator of Forests, Guyana (formerly British Guiana), South America. For three years he led expedition into the rain forests for the purpose of mapping the natural resources to provide information for forest management decisions. Following that, he joined the Ontario Ministry of Natural Resources and worked for two years in the Forest Resources Division, mapping the natural resources to collect information for Integrated Land Management
Decision makers. In 1966 Mr. Hegyi joined the Canadian Forestry Service as Research Officer and after completing his M.Sc. degree he was promoted to
Research Scientist. He worked for 10 years in forestry research, specializing in computer simulation modeling. In 1978 he joined the B.C. Forest Service and led the introduction of Canada's first GIS based information and management system for operational applications in the forest industry in British Columbia. For the next 10 years, as Director of the Forest Inventory and Mapping Branch, Ministry of Forests, Mr. Hegyi led the operational implementations of the GIS based forest information system, with extensive use of satellite imagery, covering an area of over 50 million hectares. In 1990, Mr. Hegyi joined the private sector and started a company, Hegyi GeoTechnologies International Inc. (HGI) which later became Hegyi Geomatics International Inc. Since joining the private sector, Mr. Hegyi has focused on providing consulting services for defining information needs and appropriate technology for the acquisition of spatial information for Integrated Land Management. His technology based consulting work included the implementation of GIS systems and the operational applications of satellite imagery, as well as on developing new technologies in the area of wireless data transmission, GPS and Automatic Vehicle Location (AVL) systems. During the past 25 years Mr. Hegyi has worked on several projects on defining information needs for natural resources management in Canada, U.S.A., Brazil, Argentina, Russia, Hungary, Honduras and India. Recently implemented projects in Canada which have focused on data needs assessment for Integrated Land Management. On February 19, 2011 he was hospitalized with a massive Stroke. The doctors did not have much hope for recovery. I was in a coma for 4 weeks. I heard the Doctor told my wife that the recovery was very slim. I could not communicate, but I fixed in my mind that I will recover. I spoke only 20 words and my right side was paralyzed. I attended every class the hospital offered for the next 4 month, and 3 years later, I attend the speech class at Aphasia Centre. My speech is 80 percent (in English and Hungarian) recovered and my paralysis is gone. Now, I at 83 years, i have a Pacemaker, driving my car, and relatively active.