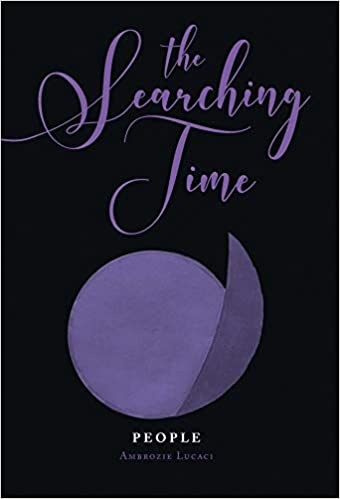 The Searching Time: People Near Us, is equally a drama, a romance, a social novel, a mystery novel, and a lyrical novel. The Searching Time is a rich drama about the interesting lives of a sixteen-year-old girl and a twenty-five-year-old man. The man suffers an unhappy marriage with a bored wife; the girl suffers, too, with school and parents and the mystery of a silver-tongued communicator who attends a pivotal party of her home. What happened with them? The Searching Time explores with great passions and poetry the rich mysteries of happiness and love, relationship and innocence. Through a range of lances, including religion and philosophy, this highly original book of essays and poetry waves a compelling narrative to contemplate this vast subject.

Passage from page 2:
"Because she had become a personality, Mrs. Writer decided to change the dog’s name, which had been Cat for two years in a row due to his strong resemblance to his remote relatives, into Scuby, because she thought he had an image to maintain with the neighborhood dogs and particularly with their masters, who would have never accepted him in the high society with such a name."

Passage from page 20:
"He had been like a small cloud, lost in the clear sky in search of the divine who at the time, busy elsewhere, could not see his soul slowly dying in the wind, slowly turning into a drop of water that wanted to quench the thirst of all the vegetable gardens."

Passage from page 27:
"Just like the entire Host family, the tree at the front of the house that protected from intrusive glances the two rows of windows on the southwest side of the two-store house where the party was held was also dressed up. Dressed in a silvery green suit and bow tie, washed by the sun, the pine tree, usually stiff, shone with happiness because he was welcoming the guests."

“There are flashes of brilliance and poetry in the how things are written. Sometimes it is very impressive. There is just so much imagination in how a tree greets guests or about the eagle in a painting. This gives the book a very artistic and unique style.”
“There are scenes with brilliant mystery and suspense. The mystery of certain events could be considered a great strength of the book.”

Editor of The Searching Time wrote:

“The Searching Time is a lyrical novel about life and love in a country. The author employs a poetic style to tell his story about the intertwining relationships of modern couples."
"There is such a lot of attitude to this book and it makes it a pleasure to read."
"You have a beautiful writing voice, and you grace your readers with its gifts often. It is a pleasure to be delivered by your lyrical contemplation to places of whimsy..."
"This is a lovely book, filled with lyrical language and contemplation."

Born and educated in Romania, Ambrozie Lucaci has been living in London, Canada, since 2003. The author, a former History teacher, wrote The Searching Time more than a decade ago. The book had a long journey until it was published.