How to Write a Book: Park It, Get to Work 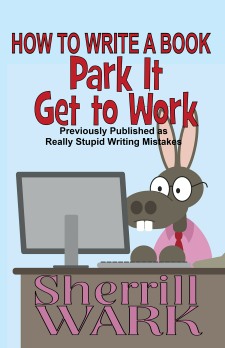 An inspirational book that will stimulate you to write that book or movie or story you always wanted to write. No more excuses! Nerdette and former editor, Sherrill Wark, explains how to keep your Muse happy and productive, how to say no to distractions, and how to dig deep into your soul for characterization. (*How to Write a Book: Park It, Get to Work* is a remodel of the popular *Really Stupid Writing Mistakes: How to Avoid Them.*)

We all have things we cannot do, or that we must do out of habit. It’s those damned “guard dogs” [amygdalae], I’m telling you! Speaking of dogs, many years ago I took one of my Rottweilers to an obedience course taught by a canine behavioural specialist. For our first lesson, we all stood in a large circle in the gymnasium while the instructor gave us some basics. The first basic she mentioned was that we would be repeating a command to a dog about 1000 times before he would learn it. He would need to be told “Sit” over and over until it connected that “Sit” meant to put his butt on the floor.

“Wow,” we all oohed. “Imagine that. One thousand times, eh?”

So I was resolved to be patient with my Phedra as she learned her obedience commands, one by one, day by day, week by week.

However … One day it dawned on me that even though I had only said it once, and had even whispered it, she had responded to the word “cookie” immediately. She even picked up the concept of spelling. Imagine that! (Another of my dogs knew cheese in three different languages, and spelled. He was even starting to catch onto the differences between Cheddar and Brie.)

Isn't it interesting how Nature's creatures learn through something they like? Through fun? That's the only way to break our programming: If you pretend it's fun, it's easier.

"A must-have book to edit manuscripts ---- useful for novice to seasoned authors and students at any level. It has clear and concise tips and rules, supported by examples, for character development, grammar and language usage, and much more. Exercises are suggested to help you understand and avoid common writing mistakes. You will be inspired to take risks and pursue your writing ideas. You will also learn how to hook your reader and write with confidence. A great addition to my collection of writing reference books!"
5 out of 5 stars - A Practical and Helpful Writer's Guide