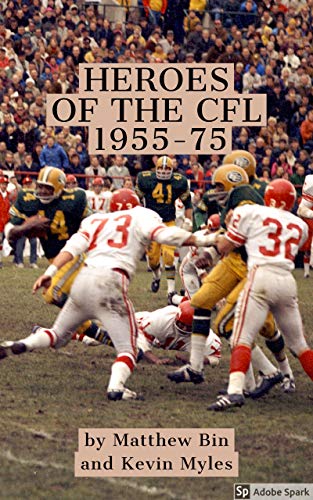 In 1955, the Canadian Football League was coming of age. Its players were better than the American pro leagues; they paid better and got better crowds, so even All-American quarterbacks like Jackie Parker and Bernie Faloney were migrating north.

And against this backdrop, some of the greatest heroes in CFL history emerged.

This book is your gateway to this great era in Canadian football. Profiling players from each team across the league, stars who remain household names even today - Jackie Parker, Russ Jackson, Ron Lancaster, and many more.

This book shines the spotlight on the personalities and talents that shaped the history of Canadian professional football. For this edition, we examine the twenty-year period between 1955 and 1975.

It was a fascinating era, and 1955 is an obvious place to start. Until then, amateur teams could compete for the Grey Cup, although for twenty years it was apparent that they were not serious competition.

The Canadian Football League as we know it did not come into official existence until 1957, but from ’55 onward the professionals that made up the Western Interprovincial Football Union – and that consisted of the Edmonton Eskimos, Calgary Stampeders, Saskatchewan Roughriders, Winnipeg Blue Bombers, and British Columbia Lions – would compete against Eastern Canada’s Interprovincial Rugby Football Union – or the ‘Big Four’ of the Hamilton Tiger-Cats, Toronto Argonauts, Montreal Alouettes, and Ottawa Rough Riders – for the Grey Cup thereafter.

Technology can change our lives quickly, and by 1954, a whole country was transfixed by the moving black and white images of their heroes, and the Grey Cup game between the Eskimos and Alouettes was must-see TV, and was available to more than a million televisions in Canada, and 40 million more in the United States.

That Grey Cup turned into a classic, and when Jackie Parker picked up a loose ball and scampered ninety yards down the sideline for the winning touchdown, he became a hero before our very eyes. The game was now permanently etched in our national identity.