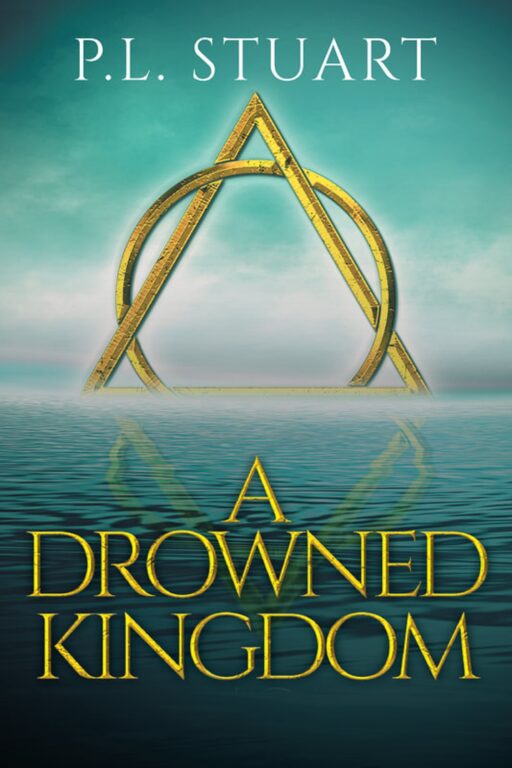 Once Second Prince of the mightiest kingdom in the known world, Othrun now leads the last survivors of his exiled people into an uncertain future far across the Shimmering Sea from their ancestral home, now lost beneath the waves. With his Single God binding his knights to chivalric oaths, intent on wiping out idolatry and pagan worship, they will have to carve out a new kingdom on this mysterious continent―a continent that has for centuries been ravaged by warlords competing for supremacy and mages channeling the mystic powers of the elements―and unite the continent under godly rule.

With a troubled past, a cursed sword, and a mysterious spirit guiding him, Othrun means to be that ruler, and conquer all. But with kingdoms fated on the edge of spears, alliances and pagan magic, betrayal, doubt, and dangers await him at every turn. Othrun will be forced to confront the truths of all he believes in on his journey to become a king, and a legend.

When one kingdom drowns, a new one must rise in its place. So begins the saga of that kingdom, and the man who would rule it all.

When one kingdom drowns, a new one must rise in its place. So begins the saga of that kingdom, and the man who would rule it all.

"Author P.L. Stuart thrills and enchants with his debut work, A Drowned Kingdom.
We are met at the prologue by Prince Othrun as he grieves over the demise of his home, the island kingdom of Atalantyx. Beautiful descriptive writing then grants us a view of that land and its history while Stuart introduces us to the Royal line of King Atalan through the eyes of the young prince, before sweeping us off to the unknown continent of Acremia where Othrun’s adventures truly begin.
Stuart is a master of characterization. Through skillfully written dialog, actions and mannerisms, each character is vividly brought to life, counterbalancing one another in gripping political intrigue, alliance, and romance. Our protagonist, Othrun, is a complicated man with great inner strength and weaknesses. His development from an idealistic young prince to a man challenged in every aspect of his life – his ambition, his beliefs, his relationships − sits as the jewel in this novel. We are invited to explore the depths and complexities of the Second Prince as much as the new continent with its diverse kingdoms and rulers.
Lovers of book series like A Song of Ice and Fire and The Witcher will find themselves right at home. Political power play and an intriguing magic system in the hands of beguiling all-female mages along with thrilling battle scenes drives the pace forward, yet depth of character remains so poignant that every bit of action is filled with emotional stakes.
A Drowned Kingdom has been one of the highlights of my reading list and with this strong first entry I expect great things for the series. I personally can’t wait for the next book, and I can highly recommend it to any Fantasy lover looking for an original and exceptionally crafted novel."

"A Drowned Kingdom is a faith-based fantasy novel in which a prince from a lost kingdom fights for dominance in a new land.
In P. L. Stuart’s contemplative fantasy novel A Drowned Kingdom, a fallen kingdom gives rise to a legend.
Accompanied by almost two thousand of his allies, Prince Othrun prepares to sail from his beloved homeland, Atalantyx. But disaster strikes, wiping the island kingdom from existence. The Atalatean survivors venture across the Shimmering Sea to Acremia, a pagan land that’s filled with nonbelievers and mages. A legend about Othrun precedes him in Acremia, where barbaric kings are eager to defeat him—both for their own glory, and to prevent the Atalateans from rising to power.
Othrun refuses to let his people fade into history, though. He sets out to claim land, alliances, and to unite people under his god’s banner. But Acremia’s warlords are imbued with powers from the elemental gods, and it will take all remaining Atalateans, a cursed sword, and a spiritual guide to defeat them.
Othrun narrates, and is an intriguing lead. His tone is recitational; he is dedicated to his own perspective of events; and his contradictions make him sometimes unreliable. As supernatural elements arise, Othrun at first eschews them, as he does anything that’s magical; only his god matters to him.
But a spiritual guide who claims that Othrun has a divine mandate arrives, and Othrun chooses to believe that the guide’s prophecies are true; his experiences in magic-infused Acremia are colored by this belief. Though Acremia’s magic flies in the face of his faith, he comes to accept that it is real. He experiences discovery and wonder as he faces looming threats, most of which he is able to overcome with logic, heart, and, above all, faith. Opposite Othrun, Acremia’s warlords and mages are positioned as sinister figures, their goals self-important above all else. One mage hopes to escape the clutches of her clan; a power-hungry warlord’s son is motivated to fight in order to preserve his way of life.
Beyond Othrun’s narration, fascinating conversations help to reveal who the people of both lands are. Atalateans speak in a formal, almost biblical, way; Acremian mages speak in a more poetic manner, their words tinged by double-talk and colorful phrases. Among Othrun’s allies, a shorthand language blossoms, its subtext subtle.
The story’s pace is contemplative, moving through long sea voyages during which Othrun reminisces about the recent past, ponders the dangers to come, and interacts with his spiritual guide. Elsewhere, hectic sword battles and harrowing escapes are described with precise details of where the characters are, how their swords move, and of the states of their natural surroundings. In a standout scene, Othrun and his allies survey the continent; each kingdom is laid out with intricacy and care.
The first book in a series, A Drowned Kingdom is a faith-based fantasy novel in which a prince from a lost kingdom fights for dominance in a new land."

Hi everyone! I'm P.L. Stuart! Nice to meet you! I'm a Canadian high fantasy author, of Ghanaian and Barbadian descent. I live in Chatham, Ontario, with my wife Debbie. A Drowned Kingdom is the first novel in The Drowned Kingdom Saga. I’m an experienced writer, in that I’ve been writing stories all my life, yet never thought to publish them. I’ve written informally - short stories - to entertain friends and family, for community newspapers, volunteer organization magazines, and of course formal papers for University. Now, later in life, I’ve published what I believe is a great fantasy novel, and definitely worth reading, called A Drowned Kingdom.